I pass this billboard on my way to work every day: 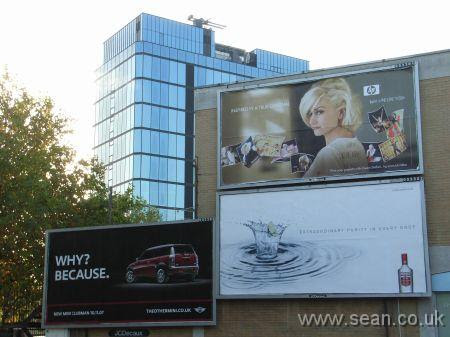 Ten years ago, someone like Gwen Stefani would have been promoting some variety of fizzy drink. This billboard, in which she becomes the face of HP printers, shows how artists are being creative in finding new revenue streams as CD sales fall. It's also interesting to see something as mundane as a printer being sold as stylish, in the way that the cars and alcohol on neighbouring billboards are. Apple's been in the furniture business for some time, selling computers on how they look rather than how they work, but they've been the exception rather than the rule.

This deal is a win-win because it enables Gwen to market her image without compromising her ideals (there's no junk food on her rider). HP benefits by associating Gwen's colourful image with its printers and drawing attention to them. I don't remember seeing an advert for rival printers on the street. Maybe HP's competitors don't even advertise because they don't have a campaign worth shouting about.

The Spice Girls have also struck a smart deal. They have sold half a million copies of their forthcoming greatest hits CD to pants firm Victoria's Secret. It's firm sale, so the shop can't return them if there's no demand. That's a pretty good pre-order level for a pop band that disappeared six years ago. Victoria's Secret benefits from some brand association, but more importantly will get customers coming into the shop to buy the CD who might never otherwise have stepped foot inside. I'm guessing that Spice Girls and posh pants customers are a similar demographic.

It seems everything is up for grabs in the music industry, with Radiohead even inspiring Sir Cliff Richard to experiment with demand-sensitive pricing. (Radiohead reportedly made $6 million on day one, incidentally). Madonna has followed Robbie Williams and signed a deal that combines touring and merchandising with music sales. For artists with their best (or at least most popular) work behind them, such deals are good business sense. 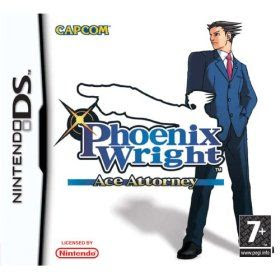 Phoenix Wright is the first computer game I've completed in decades. I'm more accustomed to playing retro games which either loop forever or drive you insane before you have to switch off the power, losing all your progress so far. Phoenix Wright on the DS lets you save at any time, which is a good thing.

In Phoenix Wright, you're a rookie lawyer in a fantasy world where the police, prosecutors, witnesses and defence attorneys all team up in a quest for the truth. You explore the crime scene for evidence, chat to the witnesses to elicit clues and then cross-examine them in court.

In the olden days, we might have called a game like Phoenix Wright a graphic adventure, a close relative of the old text adventures where you had to type in directions for your character. Back then, the challenge was to work out how to phrase your commands so they could be understood.

Unfortunately, a fair amount of the challenge in Phoenix Wright is still in the interface. To solve the game, you have to present the right evidence to people at the right time, which is tricky enough given some of the leaps of logic involved. On top of that, there's one bit where you have to rotate an object with near pixel-perfect precision, with little feedback on what you're doing wrong. And another bit where you have to click on the screen and wait for about five seconds without touching anything in order to progress - that's annoying because it's not a game where timing matters anywhere else. I had to resort to the solution to crack that particular bug. (I'm being deliberately vague, so there are no spoilers here). The scene examinations are tricky because you can't tell where one object ends and another begins, and so you often have to page through the same screens of dialogue to make sure you're not missing something.

The lack of artificial intelligence can be annoying. Sometimes you'll present evidence that makes perfect sense to you and seems a lot less contrived than the plot in hand, only to be told something like 'I fail to see how a key can unlock a door?' because they haven't predicted how people will want to interact with the objects at hand. Because it's basically a linear plot grafted onto a game interface with the illusion of free movement, there are some oddities, such as being deprived the ability to examine something you own until it fits the plot; or having to go through characters like game levels, getting all the information you need from one before the next one will appear.

The final case offers a lot more sophistication and introduces fingerprint powder (which you sprinkle with the stylus and then literally blow away) and the ability to zoom and rotate evidence. There are a few simple puzzles too, which makes it feel more like a game. Although it doesn't change the basic gameplay mechanism, it does make the story experience more fun. The fingerprint powder in particular is an inspired use of the Nintendo DS's microphone.

Although Phoenix Wright was sometimes frustrating as a game, as a piece of interactive fiction, it was a great experience. The characters were well written and the plots were twisted and at times moving. The dialogue was well written, although there are a lot of typos in the final case, which jarred somewhat.

It's the warmth of the characters and the quirky storyline that keeps you coming back for more, though. I'm told that the sequel doesn't use the evidence manipulation or fingerprint powder from the final chapter, which is a shame. But after taking a well earned break from crime fighting, I'm sure I'll be ready to take on some new cases, however devious the criminals might turn out to be.

Radiohead: Is DRM somewhere over In Rainbows?

Radiohead is letting fans decide how much they want to pay for the new album 'In Rainbows'. The 'honesty box' approach will enable the band to reach out to new listeners or lapsed fans, who might be prepared to buy the album for a few pounds but would never buy it as a new release CD. If people download it for a penny, Radiohead presumably makes a short term loss because of the cost of hosting the files and serving the sale. But the band has set no minimum price. You can download for free if you like. The band, like Prince and The Charlatans, presumably sees the merit in giving away music to build an audience for shows and other projects. My photo from 1995 when The Bends was released. See more photos from this concert

NME says its readers are planning to pay an average of a fiver, which reflects the true value of most albums in this post-Fopp and post-ebay era.

As well as the download, there is a box set that includes the album on vinyl, CD and download (wot, no tape?) along with artwork and extra tracks. That costs forty quid. Clearly this will become a desirable item and many will discover Radiohead's music later and want to acquire one, but I'm not sure how much the value of this item will climb from its already steep price. This package will enable the band to keep most of the value that usually goes into the dealers' pockets when genuine special editions are traded at record fairs.

This time there is no record label, so anything you pay Radiohead over and above the cost of sale is profit to the band. If I pay them three quid for the new album, that's probably a couple of quid more than they got when I bought each of their major label albums.

So why haven't I placed an order for the album yet? I've been a fan since the early days. 'Kid A' is one of my favourite albums ever - one of the few I can loop over and over again.

The problem is that there's no indication of what format the digital album will be in. Will it work with my iPod? Will I be restricted from copying to another iPod if I get one? Can I burn it to CD to play in the car? It might only last as long as Radiohead's website does. That happened with Prince's digital store - try reactivating any songs bought from him in Windows Media Player format, and they won't work because Prince turned off the authentication server when he redesigned his website. Fans who have acquired new computers or audio devices can no longer play the music they've bought on them.

If the Radiohead downloads are good quality MP3s, that's great. But they shouldn't really expect people to part with money and preorder an album without telling them where it will play and how it will work. I care about that more than the track names. The concept of a Radiohead album I understand - it's over 30 minutes of music by Radiohead, probably split into songs. What I need to know is whether it will work, and whether it will still work when I want to play it years later. In that sense, the vinyl's a much safer bet.

The album's out on Monday, so those who have taken the gamble will find out then what format's on offer, and the word will doubtless spread. Until then, buyer beware.