A fresh breath of Oxygene

I meant to write this before Christmas, but didn't get around to it. Now I have...

The red and white lights of cars travelling on the Champs-Elysees combined with the blue Christmas lights in the trees to make a twinkling French flag. My schoolboy French and a swift internet browser had got me ticket number 94 to see Jean-Michel Jarre performing Oxygene in Paris. As I approached the theatre, near Place de la Concorde where Jarre entertained a million in 1979, there were spotlights reaching up from the theatre's pillars, reminiscent of the lights used at Docklands.

I collected my ticket. As the man on the desk whistled Oxygene IV to himself, I studied the cardboard model of the auditorium. I was in row four. Not bad. Not bad at all. The theatre sat 1000 and was a surprisingly intimate venue for a musician more noted for using skyscrapers as projection screens.

The 45 minute ambient piece 'Waiting for Cousteau' was played in the foyer and theatre before the show. There were a few familiar faces from the Teo & Tea showcase in the audience, which I attended in March.

When the curtain went up, there was an egg shaped chair on the stage which spun around to show JMJ sat on it. It was a nice entrance, but there was no reaction from the audience until he spoke. The weird thing about theatre gigs is that people treat them like plays, and only clap at the end of the acts or when prompted. He delivered a spoken introduction (in French, but with a short English greeting to foreign visitors), brought on the band, and then set up at one of the banks of synthesisers. 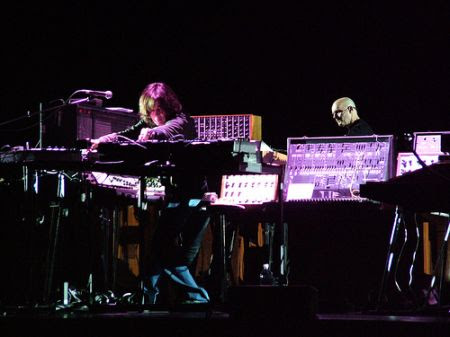 Photo of Jean-Michel Jarre at Theatre Marigny in Paris. © Duncan Walls. Used with permission
There's always been an element of, shall we say... 'computer assisted performance' about a JMJ gig. Quite a few fans maintain that the Teo & Tea showcase was mimed, although it felt pretty real to me at the time. The full spectacle of the typical Jarre concert could only be achieved using some kind of computer synchronisation, but I choose to believe the music is mostly live, most of the time. With your favourite bands, as with religion, faith is everything.

For this show, there would be no fancy slideshows or lasers to hide behind: just a lot of analogue instruments and four musicians. It's trendy for bands to play albums from start to finish at the moment, but that robs the set of most surprises. For Oxygene, one of the first albums I owned, it was good to hear the spontaneity in this performance. Three new variations were included too, which were previously only released on DVD, and the whole set was concluded with one of the tracks from the 1997 sequel album to Oxygene.

At one point, a mirror was lowered over the stage so that everybody could see what was being played. It was odd to see the bass notes on the right hand side of the keyboards, but it reinforced the feeling that this was real. During the show, Jean-Michel played a theramin, some kind of weird stick instrument and a number of other instruments and synths. When he played, he concentrated hard. There was the feeling that this was a show where he was taking real risks and things could go wrong.

The crowd cheered for Oxygene IV, which was an odd reaction. I would have thought any real fan would be mostly tired of it by now (as I am), and would prefer the more mellow Oxygene II and Oxygene VI. But the hit single did sound fresh and the bassline was hypnotic. 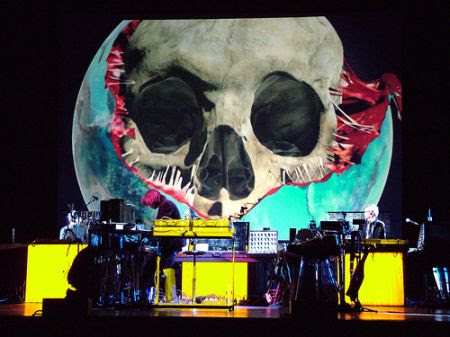 Photo of Jean-Michel Jarre at Theatre Marigny in Paris. © Duncan Walls. Used with permission
Last year, Jarre released a re-recording of Oxygene, including a DVD edition that filmed the performance in 3D and provided red and green glasses for watching it. The 3D effects were fun but gave me a headache after a while. The film (also available in a flat version on the 3D disc and separately) is a fine memento of the show I saw. Alongside the DVD edition, a single CD edition of the re-recording was released.

JMJ's now announced that he's going to tour this production worldwide, with gigs announced in the UK, Denmark and Belgium. To promote this, he released the Oxygene re-recording for free with the Mail on Sunday the other week. It's an approach that Prince tried with his new studio album, but it seems JMJ's trying to have his cake and eat it. This isn't previously unavailable material, as Prince's album was: it's a CD that was released for sale just eight weeks ago. Those who bought the album in December are going to be a bit miffed to find it's available for free now. There might well be shops carrying stock that is now virtually worthless too, given that you can buy the CD on Ebay cheaper than you could have bought the newspaper. (The DVD content is still exclusively available through retail).

Newspapers have a unique channel for distributing millions of copies of an album. I'm pleased that some of my favourite acts can reach new audiences this way, but isn't it time for newspapers to start being a bit more creative? The day that an up-and-coming band releases its album for free through a newspaper, and the newspaper has the vision to recognise the opportunity there, will be a scary day for the music industry. Until then, giveaways are basically publicity stunts and artists should be careful whose hand they bite.

Thanks to Duncan Walls for permission to use these photos. See more at Duncan's flickr stream and visit his site JarreUK for the latest tour news.