My experience taking part in the Olympics Opening Ceremony

I mentioned previously that I had been quiet on the blog this summer because I had been working on two books and a show. Well, the show was the opening ceremony of the London 2012 Olympic Games, where I was a volunteer performer in the industrial revolution sequence. It was such a fantastic experience, a real 'once in a lifetime' opportunity.

During the rehearsals, I didn't keep a diary, but I did jot down a few notes, and I knew I was taking part in something special so I tried to really drink it all in, as much as I could. At our first rehearsal, we heard the music for our segment. We weren't played it again for several weeks, but I heard it in my head every few days until then because I'd focused so hard on remembering it the first time.

We weren't allowed to take photos during the rehearsals, so I don't have any photographs of most of the experience. As a keen photographer, it's quite unusual for me to have so few photographs for such a significant event in my life, but we all started snapping away backstage when the dress rehearsals began and we were in costume.

I've now written an article about my experience taking part in the London 2012 Olympic Opening Ceremony, from the first audition to the final flaming ring, and including some of my photographs. I wrote it mainly for myself, so I would have something I could read in years to come to remind me of the the whole experience, but I hope that others (both in the show, and those just curious about how it came together) will enjoy it too.

I was visiting the Guardian website the other day and was surprised to see my own book staring back at me from the sidebar, at the #1 spot in the bestsellers list for the Guardian Bookshop.

The titles listed change depending on the page, but 'iPad for the Older and Wiser' is listed as their top weekly bestseller on a couple of pages about cars and technology.

It's always exciting to see the book in a shop or on an unexpected website, because it shows the book is getting out there and finding readers.

You can visit the Guardian's page for the book here. You can find out more about 'iPad for the Older and Wiser' by visiting my microsite for it.

Thank you to my friend Mark for bringing this to my attention!

Playing with the Raspberry Pi 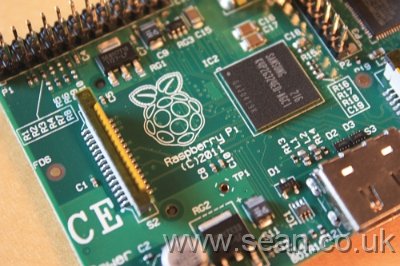 Over the last week, I’ve spent a fair bit of time playing with the Raspberry Pi, the cheap computer that has been created to inspire the next generation of computer scientists. There was a huge buzz when the Raspberry Pi was first released, and I see a lot of hard-core geeks using it to create hardware projects. But I’m not sure how many people are using it to just learn a bit of coding, or whether a lot of those early purchases are sitting in their boxes.

The good news is that it’s not hard to set up. Mine pretty much plugged and played. I tried it on a TV and there was an overscan issue (text spilling off the screen) which can be fixed with some tinkering in the config files, but it worked perfectly with a monitor (and had a much clearer resolution). I was amazed that I could just plug it into my router and it would connect to the internet automagically. I expected that to be a real pain in the neck.

The bad news is that it can display odd behaviour sometimes. I had the internet connection working in the command line (tested by pinging Google) but couldn’t get it to work in the desktop environment’s browser. That turned out to be a problem with the keyboard I’m using (a bog standard USB keyboard I bought to use with the Pi). My USB hub and/or keyboard are causing power conflicts that affect the Ethernet connection, and others have reported similar results. It’s easy enough to fix (by replacing them), but the lesson is to disconnect and/or try alternative hardware before tinkering with settings (which luckily, I did).

Speed is a bit of a challenge: it’s not very responsive at the moment, although that could also be related to a hardware conflict, I’ve heard. It’s not uncommon to double click an icon and not get any response from it for a few seconds: long enough to click it again and find you’re opening the same program twice. The web browser coped fine with streamlined sites like Wikipedia but struggled to render more complex web pages, including my site (so please accept my apologies if you’re reading this from a Raspberry Pi now!).

I’ve dabbled in the programming tools provided, and tried downloading and running various Linux packages, including GIMP which was a bit slow when processing a full resolution digital photo (but noticeably better when the image was resized), and the Calligra office/productivity suite which works well. There wasn’t a music player in the Linux distro I used, but LX Music works well, and VLC and Rhythmbox installed okay (but I haven’t tested them yet). LBreakout2 is a fun little breakout game you can try too.

Have you got a Raspberry Pi, and if so, what have you done with it so far?