A short history of the Raspberry Pi 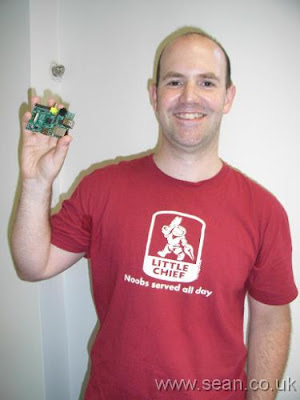 Eben Upton, co-founder of the Raspberry Pi Foundation, recently gave a talk at the Google Campus in London and I went along to hear about the inspiration behind the Pi, and how he co-created a start-up that will ship nearly a million units this year.

After finishing his PhD at the University of Cambridge, Eben was working as director of studies, responsible for talking to schools to get more computer science undergraduates in. When he went to Cambridge in 1996, there was a 6:1 ratio of applicants to places and you could rely on those admitted having a deep understanding of how computers worked. Ten years later, the application ratio had dropped to 2:1 or 3:1, and although they could still find 80 to 90 students each year, the trend was worrying. Those entering the course also had much less impressive technical skills, Eben said. Whereas there used to be one or two people who had done some assembly language programming, now it was mostly about HTML. That creates huge challenges with teaching, because if you have to explain basic stuff at the start, the course either gets squeezed or extended to cover the in-depth stuff graduates should learn.

Eben learned to program like I did, playing on 8-bit computers and writing simple programs for them. When 8-bit computers evolved into games consoles, we lost a lot of that ability to tinker, because their business model is that they’re designed to be unprogrammable, Eben said. PCs can be programmed, but you have to want to get the tools and documentation to do that. “It’s a 10 minute barrier, but lots never cross it,” said Eben.

So he drew up a blueprint of four things that would come to define the Raspberry Pi:

The Raspberry Pi Foundation was incorporated as a private company limited by guarantee and registered with the charities commission.

In the 1980s, the BBC Micro was a computer that met all the Pi Foundation's objectives, and gave many people their first taste of programming and electronics. Originally, the foundation wanted the Pi to be the new BBC computer and they had discussions with the Beeb but it became clear that this would be impossible because the BBC can’t be seen to compete with commercial ventures today. A final attempt to get the BBC’s endorsement was to reach out to BBC journalist Rory Cellan-Jones, who Raspberry Pi Foundation trustee David Braben knew. Cellan-Jones put a video on his blog, and two days later it had got 600,000 views.

“It was great for two days,” said Eben. “I spent two days pressing F5. Look how popular I am! Then I realised I had promised 600,000 people I could build a $25 computer. I had no idea whether I could keep that promise.”

He did know the costs added up, but he didn’t know how to go about mass production. Eben was working at Broadcom by now, and they built the first ones as a favour. The six trustees funded the working capital to make the first large batch of 10,000 in China, starting by doing 2,000 at a cost of $50,000. The level of interest was phenomenal, though: tens of thousands of people downloaded the alpha SD card image from the website even though they had no idea when they might get a device to run it.

It became clear that in batches of 10,000 it would take years to satisfy demand, so they instead moved to a model of licensing the design to RS Components and Element 14, who now provide the working capital and manage production and customer service. One person asked whether these companies make a worthwhile margin given how cheap the Pi is. “Charity is not scalable,” said Eben. “Sooner or later, you run out of other people’s money. Everyone in the value chain makes enough money without having to say this is part of their CSR (corporate social responsibility programme). Some make less than they would in an ideal world.”

That’s given them the ability to scale rapidly, and he expects them to have reached close to one million sales by the end of 2012. “We accidentally made a computer company,” said Eben. It has a fixed cost base of £500 per month for the web hosting and no employees, although clearly lots of people (including Eben’s wife Liz) are investing a lot of time in the venture.

He said it will be a couple of years before he knows whether the Pi is solving the problem it was created to address, and the top priority will be to optimise Scratch so that it runs faster.

UPDATE: By May 2021, 40 million units had been sold. The Raspberry Pi software has been extensively refined over the years and offers a slick desktop experience, with easy-to-use programming tools.