I'm a keen photographer, and I've been fortunate to be able to photograph some wonderful places and events. When I first set up this website in around 1997, I included a handful of photos I'd taken. That led to some interesting opportunities: I licensed one photo for a brochure, and another was licensed to be part of an architecture exhibition in Paris. I haven't updated my photo galleries properly since then, though, so I've been thinking for a while about the best way to put more of my photos online.

I considered selling photos through microstock libraries, but the numbers didn't really add up for me. I know there are lots of people making a lot of money from microstock, but it's very much a volume game. If you're only getting a few cents for a download, it's a long time before that becomes worthwhile. The microstock libraries are good at marketing their collection as a whole, but they're marketing your competition beside you. And they massively undervalue images that have some kind of uniqueness to them and images that are rarely used, but are highly valued by those who need them. Although Microstock wasn't for me, I found this book to be an excellent overview of the opportunity and how to maximise it: Taking Stock: Make money in microstock creating photos that sell

I considered sharing images through Flickr too, and I have experience of using that. It's a great community site and a good way to get visibility of images.

I concluded, though, that I'd prefer to include the photos in this website. It's partly a matter of being able to ensure continuity by having the content under my own domain name, and also a case of being able to cross-promote. I can integrate photos with other parts of my site more easily, and people who find my photos can become aware of my books and other work.

My photo of Big Ben, taken on a clear blue day

The challenge, then, was to find a scalable way to integrate the photos with this site. The solution, I found, was to use a program called Jalbum, and to heavily customise one of the skins so it matches my site design. The customisation and template design has been quite a lot of work to get right, but I'm pleased with the result I'm getting. Ideally, I would have liked to have put the descriptions and other information into the photo metadata for extraction from there (so that it would also be available to other programs and the operating system), but that turned out not to work. Instead, I use Jalbum to add captions, titles, and the map location. Additional information, such as the camera model and date, is extracted from the photo's existing metadata automatically. The software generates a gallery of photos in HTML using my website template. I'm adding watermarks using Photoshop, and manually uploading the galleries to my site. Adding each gallery involves a little bit of manual intervention (apart from the captioning and so on), but I've written a process to streamline that and avoid disturbing galleries that have already been watermarked and uploaded.

Since the creation of the photo pages is highly automated, I wanted to explore what I could do to make them interesting and build an experience around the photo. For each photo, I have added:

Venice, one of my photos to make it from the old gallery to the new gallery

I've also updated my Pairs memory game, which incorporates photos from my new gallery. Given that screen sizes and resolutions have increased so much since I first made the game in 2003, I've been able to increase the size of the images used by 50%, which makes for a much better experience.

After a very long period of development (it's been a busy couple of years), my new travel photo gallery has now launched, with three folders: Brussels, Italy, and London. London is a large gallery, and the other two have a handful of photos and have been launched now to stop the menu page only offering one option.

My photo of Nelson's Column, taken with a zoom lens (obviously)

One of the things I've been able to do with the London gallery is post photos that pre-date the widespread adoption of blogs and digital cameras, such as my photos of the flowers outside Buckingham Palace in 1997 when Princess Diana died, and my photos from Michael Landy's Break Down art experience in 2001. I expect I will add to this gallery in the future, as I take new photos and perhaps as I rediscover older ones.

I have lots of other galleries queued up to publish gradually over the coming months, some of them already captioned, so I'll blog here when I have a significant new gallery online. In the short term, there might be some odd navigation between the old and new galleries, but let me know if you spot anything that doesn't seem to be working right or if you have any queries about how I set up the gallery. You can add a comment below.

This is so surprising and wonderful that I had to share it! Entrants in the Edible Book Awards run by Christchurch Polytechnic Institute of Technology (CPIT) are challenged to create edible interpretations of books. I'm honoured to say that CPIT librarian Tina Verschoor found inspiration in Raspberry Pi For Dummies and created the following masterpiece: 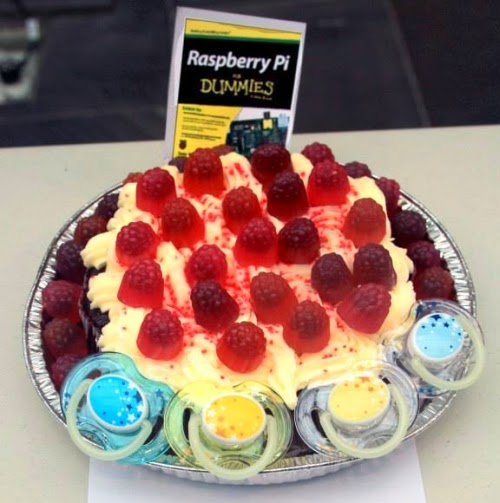 Thank you to Liz Upton, Morgan Tait of the New Zealand Herald, Anna Turner of CPIT and Tina Verschoor of CPIT for alerting me to this photo and helping me to get permission to post it here.