I blogged last week about the fantastic Shaun the Sheep character and prop sprites that Aardman has made available for Scratch games, and how you can extract them to use them in your own games. I've now published my own Scratch game using them, Shaun the Sheep Football (also embedded at the end of this blog post). 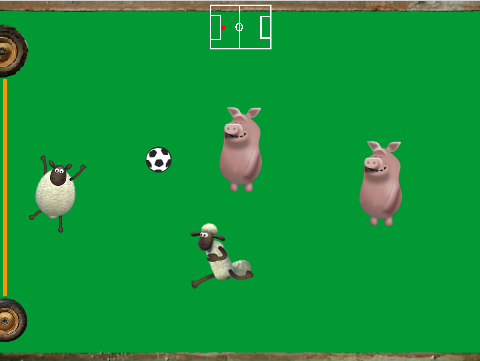 Screenshot: The pigs shoot at the goal in Shaun the Sheep Football

Once I'd decided I wanted to use the sprites to make a project, I had a think about the kind of game I wanted to make, and came up with these guidelines:

A football game, pitting Shaun against the pigs with an automated sheep goalkeeper, met all these requirements, and enabled me to try several things I hadn't tried before. One was creating a flick-screen game, because the pitch stretches over five screens placed side by side horizontally. The sprites move all the time, but have a script that loops continuously to show them if they're on the same screen as Shaun, and hide them if not. Keeping the sprites moving, even when Shaun isn't looking, made the game feel more authentic. It's particularly good that the pigs can keep moving towards the goal and shoot even if Shaun doesn't follow them, so there's a feeling that they are playing the game too, rather than just being there for Shaun's entertainment.

I used the animations at appropriate points in the game to try to make the sprites seem more character-like. Shaun's running animation is superb and adds a lot, but I also used some of the other sprite animations to flesh out the game. Shirley (the referee) drops in on her wire to announce the outcome whenever there is a shot at goal. (Bearing in mind that Shaun might not be watching when the pigs shoot at the goal, it was important to provide feedback on what they're doing). The sheep goalkeeper sprite stretches out its arms when it's diving for the ball, and claps its hand to its forehead when it lets a goal in. The jumping sequence that was created for platform games is used for a victory dance when Shaun scores a goal. The goalkeepers "dive" to a random point in the goal when a sprite shoots at them. I also put in the walking sheep as a non-playing character. He just wanders around the screen, but makes the pitch feel more full and makes it feel less like Shaun vs The World. (The walking sheep is the only one that doesn't move all the time, as a speed optimisation).

The game mechanic was quite complex to work out, especially the pigs. I started off by creating a pig that homes in on the ball and then runs towards the goal when he gets it, and shoots. The other pigs move around without regard to the ball, but if they touch it, they also run to the goal and shoot. That makes them more like obstacles for Shaun to dribble around, while the homing pig will actually chase him for the ball. Shaun can tackle any of the pigs to take the ball back, and they can tackle him too. When a pig shoots (by reaching a point close enough to the goal) or Shaun shoots (when the player taps Space, any time on the pig goal screen), the ball moves at a randomly chosen angle towards the goal. Although there's an element of chance in there, you can increase the likelihood of scoring by getting close to the goal and being close to the middle of it when you shoot. If the defending pigs don't get in the way!

To provide a visual hint that the screen flicks, and also to help people understand where the ball is when the pigs have possession, I added a graphic at the top of the screen that shows the ball's position on the pitch.

I set a time limit of two minutes. That feels like a good length of time for a match, and enables the pigs and sheep to each score a few goals. I didn't want to have a game where the scores could get unrealistically high for a football game. In some games, there is a mechanic like energy or lives to dictate the end, but the only natural way to end a football game is when the ref blows the whistle. It was important the game didn't go on forever, otherwise there would be no real sense of winning or losing, and people would just stop playing unfulfilled at some point.

I tried a few things that didn't quite work, and took them out again. One was enabling Shaun to kick the ball away from him (or shoot) at any time. Although it added authenticity, it also added complexity and didn't really enhance the gameplay. I tried using a grass texture for the pitch, but it made the characters harder to see (the Shaun sprite is quite fine in detail, with a white body and black legs). It looked better with a plain background that offers a good level of contrast with both white and black.

I experimented with the relative speeds of Shaun and the pigs to get them right. Shaun runs faster than the pigs, so he can catch them and intercept them, but not so much faster that a lazy player can always win. You need to start running when the pigs do.

While creating this game, I found that you can do this in Scratch, which I didn't know before:

Basically, the 'go to mouse pointer' block, which has a menu in it to choose a sprite to go to, will also take a variable, which can store the name of a sprite to go to. That concept proved to be important because it enables the ball to follow the sprite that is dribbling it. When a sprite takes possession of the ball, it changes the possession variable to its sprite name. The ball always goes to the sprite in that variable name.

You can play my Shaun the Sheep game below (requires Flash, so won't work on Raspberry Pi or iPad). Click the green flag to start. Cursor keys move Shaun. Use Space to shoot at the pigs' goal (on the right of the pitch). Note that the game includes music and sound effects. You can see the code, leave your comments and find the game's page on the Scratch website here. You can also leave a comment below. Find out how you can make your own Shaun the Sheep Scratch game here.

Hi Shaun - sorry, Sean. Great game. I was rubbish though - the pigs are too good for me ;-)

Thanks, Lynne! I might see about adjusting the difficulty because a couple of people have said they found it hard. Do you find it hard to chase the pigs after they get the ball, or is there something else that made it hard for you?