The first of my author copies have made their way through the Christmas post, so this is what elevenses looks like for me this morning: a camomile tea, a mince pie, and a flick through the new book. Cheers! 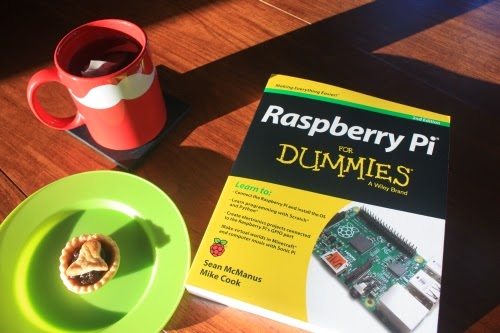 This second edition of Raspberry Pi For Dummies has been updated to take account of the changes in the Raspberry Pi hardware and software since the first edition was published in March 2013. We've been able to increase the pagecount on this second edition, which has made room for three new chapters.

The first covers Minecraft, and how you can use Python to build worlds in it. The example program builds a random Minecraft maze you can walk around inside, and was previously published in Raspberry Pi Projects. This book is for a different audience, so we thought it would be nice to include it here too. Watch a video of the Minecraft Maze Maker in action here.

There's also a new chapter on Sonic Pi, a programming language for writing electronic and sample-based music. I had a lot of fun writing this chapter, and I've posted an extended remix of my Sonic Pi demo music here. Given the book it's for, and the demonstration nature of the track, I thought the title 'Showroom Dummies' was apt. I've uploaded it to Soundcloud, so you can listen to the Sonic Pi demo here too. To mark the book's publication, I've also created an infographic showing you the note names and numbers used in Sonic Pi and Scratch. Print it out, stick it beside your Pi, and start composing!

The third new chapter is an appendix covering RISC OS. Given the rest of the book is all about Linux, we thought this topic best belonged in an appendix. It provides a short introduction to help you get your bearings on the RISC OS operating system, and will hopefully encourage you to try it out and discover an interesting alternative take on the graphical user interface.

To make some room, we did have to drop the web design project that was in the previous edition. The rationale was to make room for more Pi-specific technologies. If you're looking for a guide to web design, my book Web Design in Easy Steps might be what you're looking for, and you can use Leafpad on the Raspberry Pi for coding your HTML and CSS.

I'd like to thank everyone for their fantastic support of the book, and the first edition before it. Publishers only create a new edition of a book when the first edition is successful, so it is thanks to everyone who supported the first edition that we're able to create this updated edition and continue to help readers get the best from their Raspberry Pis. I was delighted to see the book was recommended in the official Raspberry Pi Christmas Shopping Guide, which said the book is "a superb guide to the device and what you can do with it. It’s good for beginners, but it’ll take you a long way – much further than you might guess from the title!". Thank you also to Code Club, who shared this great photo of community manager Michael reading the book:

Wishing you a Christmas filled with mince pies, Raspberry Pis, and whatever you wish for!