Throw some brains at it! 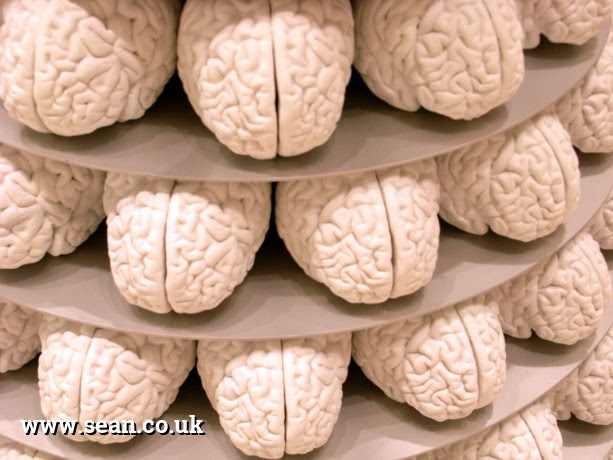 Writing a book can be a solitary business, especially for self-published novelists. I had a policy of not discussing my novel while writing it, because I wanted people to be excited by the book when it came out and not bored of hearing me talk about it. But that meant I overlooked an important step in the book's lifecycle: that of testing the cover and title with its audience before proceeding to publication.

My novel is a techno-thriller set in the music industry, and involves a conspiracy where a record label sells computer generated music to fans, without telling them the bands are fake.

It originally came out under the title University of Death, named after the "real" band that gets mixed up in the action. The cover design was a stark black and yellow silhouette of fans with their raised arms at a concert. The cover and title were distinctive, but they didn't reflect the book's content well, and some people were put off by what they thought was a zombie story. Given that most of my non-fiction books are about programming and website design, it was a real kick-self moment when I realised I'd failed to test the end product with its audience before releasing it.

When I came to publish the book on Kindle recently, I decided to get some more brains on the case. I started by running a brainstorm on Facebook to invite people to suggest a new name for the book. I had really struggled to come up with a good name, but there were lots of brilliant suggestions from my friends. I filtered out the titles already claimed for erotic fiction novels (my, those authors are prolific!) and those encumbered by trademarks or other business activities (I was particularly sorry to see Spytunes and Autotuned struck off the list). Finally, I chose the title 'Earworm', suggested by my friend Andy Lawn.

For the cover, I ran a design competition through 99designs.co.uk. You provide a brief, and the site's talented community of designers submit designs to meet it. After some rounds of feedback and shortlisting, you pay £189 for your chosen design.

Almost immediately, a design came in that I thought was a contender to be the final winner. It looked professional and it had dramatic typography that wouldn't look out of place in an airport bookshop. Even as some great other designs came in, it remained a favourite. When I had a few designs in, I put together a shortlist and ran a poll among my Facebook friends. Guess what? My favourite cover ranked fourth. Out of six. It looked like a war novel, somebody said, and they were right.

This was when I had to trust the crowd. It might be my book, but it needs to appeal primarily to my readers, and my friends represented those readers in all their diversity much better than any one person could. They identified a cover with much broader appeal, that better reflected the themes of the book, and which I'm pleased to say I've grown to love.

I've learned that whether it's for a brainstorm, or market research, one of the best assets an author can have is a network of friends who can provide a fresh perspective on the big decisions. Thank you to everyone who helped me. It made a huge difference.

Find out more about Earworm and see the final cover here. Earworm is out now on Kindle and in print on Amazon.