I’ve been invited to the Brighton Science Festival on Monday 12 February, where I’ll be hosting a number of Coder Academy workshops. They are practical coding sessions for 7-10 year olds, tying in with my latest book (also called Coder Academy) which is published by Brighton-based publisher Ivy Kids.

You don’t need any previous experience of coding, just an interest and desire to know more. We’ll be learning snippets of the Scratch programming language and using them to experiment with digital art. The ticket includes a copy of the Coder Academy book, and I’ll be very happy to sign copies on the day!

Interested in coming along? Places are limited so register as soon as you can. And why not set yourself up with an account on the Scratch website before you come? It means you’ll be able to save your projects to share or work on later.

You can see the full programme for Brighton Science Festival here (10-18 February 2018, Brighton, various venues). Thank you to the organisers and the team at Ivy Kids for making this happen. I'm looking forward to seeing what the participants create!

The current issue of The MagPi includes a feature I wrote about Midimutant, a Raspberry Pi project for programming the Yamaha DX7 synthesizer. The DX7 was popular in the 80s, but was hard to create new sounds (or patches) for. Richard James, who records as Aphex Twin among other aliases, suggested that there must be a more interesting way to program an FM synthesizer and his friend Dave Griffiths took up the challenge. Using a Yamaha TX7 (which is like the DX7 but without a keyboard), he made a Raspberry Pi project that randomly generates sounds and then mutates them until they come close to a particular target sound. 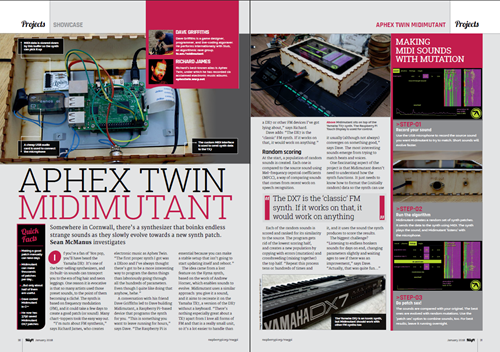 The project is broadly applicable, because it doesn't need to understand how the synth works: it just needs to be able to create random data for it to play back, and then listens to the result.

"It's actually most interesting when it doesn't quite work," says Dave. "Discovering that some cymbals were all evolving to silence as the background hiss from the TX7's 12 bit processor was considered a close enough match, was an 'aha' moment - these types of evolutionary algorithm have a tendency to surprise you like that."

Richard says he will be using the results on his tracks whenever possible, so you might well hear Midimutant's results before too long.

To find out more, check out issue 65 of The MagPi. It's in shops now, and it's available for free download too. While you're there, you can also pick up MagPi issue 64, which includes my report on Pycon.

(If you're interested in the Raspberry Pi, check out the new, updated third edition of Raspberry Pi For Dummies here too.)

We were in St Ives over the holiday period and had a chance to see the St Ives Lifeboat, RNLB Nora Stachura (RNLI 13-11) on exercises at sea, and coming in to land.

I had my pocket camera on me, and took the opportunity to take some photos and record some video clips, which I have edited together into the short film shown below. I was a bit late realising I could make a video of this, so there's one sequence of the boat and the tractor joining which I would ideally have captured on video, but I have bridged that using a series of photos. I found that some of the clips required a cross-fade because their composition was too similar and it jarred when I just cut between them. The whole process took about an hour, but I've edited this film down to about three minutes.

This was an enjoyable exercise in photography and film editing, and I hope captures the spirit of the experience. It was wonderful to see the lifeboat and its dedicated crew at work.