A round-up of the Scratch Europe 2019 Conference

If you've seen other accounts of Scratch Conference Europe 2019, you'll notice everyone had a different experience. It was a packed programme, with eleven activities happening in the same slot on the first morning, for example. As a result, it was impossible to see it all. One thing that permeated the whole event, though, was a friendly spirit and a passion for Scratch, and its potential to help people to learn programming and life skills.

The Raspberry Pi Foundation were our hosts, and gave us a generous goodie bag that included a shiny new Raspberry Pi 4 computer and accessories. This new model runs Scratch 3, the latest version, at full speed so Raspberry Pi users can code in Scratch without any compromise. As such, the Raspberry Pi 4 significantly lowers the entry price for coding in Scratch.

Mitch Resnick from the Lifelong Learning Lab at MIT, which created Scratch, delivered the day one keynote. He celebrated the spread of Scratch, with 10 million new accounts registered on the website in 2018, and many more users who don't use an account. Resnick sees Scratch as a way to support skills development in creative thinking, systematic reasoning and collaborative working, the skills that are vital for fulfilment in life today. Scratch is not always used in ways that empower students to develop these skills, though. While Scratch has spread far and wide, the challenge now is to spread the educational vision that will prepare students for a more fulfilling life. You can find out more about the educational vision behind Scratch in Mitch Resnick's book, Lifelong Kindergarten, which I've read and can recommend. 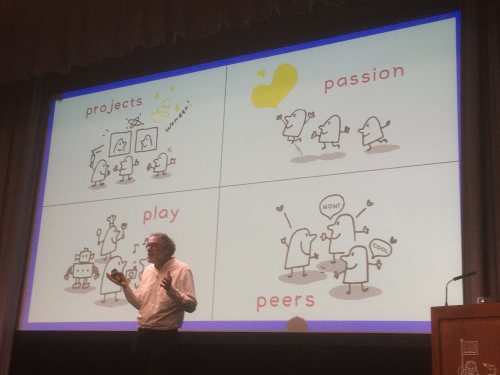 Mitch Resnick delivers his keynote in front of a slide that says Projects, Passion, Play, Peers

I delivered a presentation on debugging, which provided a methodology for finding and fixing bugs in Scratch programs, and a Top of the Bugs chart of the errors I saw most often as a Code Club volunteer. The aim was to help educators to quickly spot errors, so they could guide students more effectively. Thank you to everyone who came to the session and spoke to me about it afterwards. I've uploaded my speaker notes on debugging in Scratch here, and I have now written an article about Scratch debugging for Hello World Magazine. 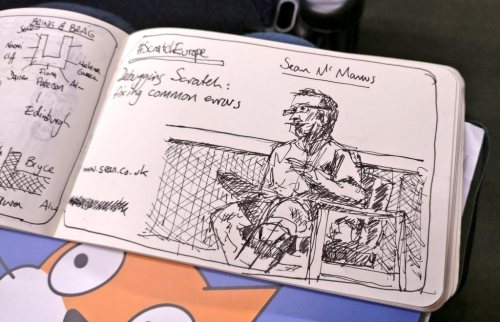 Many of the sessions I attended had a focus on physical computing. It was fun experimenting with the Sense HAT extensions for Scratch 3 on Raspberry Pi, which enable you to access the Sense HAT's sensors. The movement sensors open up interesting opportunities to use the device as a game controller, and the 8x8 grid of LEDs provides an effective display. You'll be able to see one of my Sense HAT projects soon.

I enjoyed the session on creating an interactive storybook using the Makey Makey. The Makey Maker is a board that you can use to hook up simple circuits to your computer, which detects the inputs as keyboard button presses. It's easy to use with Scratch. The storybook worked by having a copper wire on each page, connected to the Makey Makey, so that when you touched the copper and held the earth wire, the circuit was completed and an animation could be triggered on screen. I remade the Very Hungry Caterpillar with Scratch animations. 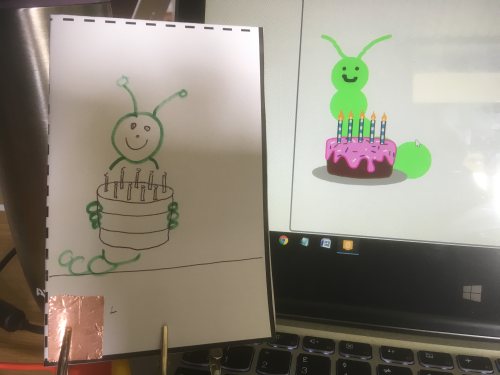 The session using the Crumble Kit to create a robot was fun. The kit was similar to the CamJam EduKit 3 robotics kit, which would probably be the better option if you have a Raspberry Pi. If you're using a PC, the Crumble makes robotics much more accessible, though. Crumble uses its own block-like language (not strictly speaking Scratch), and I found it a bit restrictive. There's no support for keyboard controls, for example, so I couldn't use the keyboard to steer the robot which was my first instinct as soon as we got some wheels spinning. There's no denying that it was great fun rigging up the robot, though, getting the lights twinkling and starting it charging around the desk. 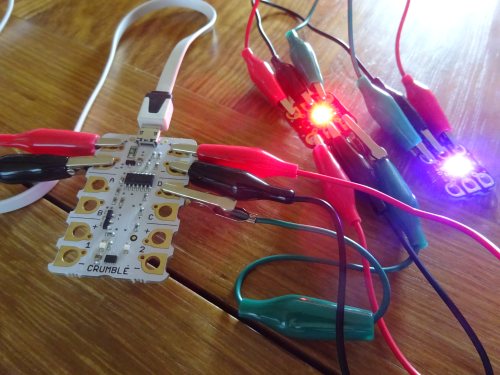 A crumble board with twinkly lights

The event was well supported by the Scratch team, many of whom had flown in from Boston. Kreg Hanning led a session showcasing the prototype ScratchGo, the first official hardware for Scratch. It's a sensor device that will enable you to extend Scratch with your body, craft materials and toys. It's about physical computing without electronics. It connects to a computer over Bluetooth and provides access to a centre button, movement sensors, a light sensor and a green button to remotely click the green flag to start a Scratch project. There is a Scratch extension that adds blocks for using it in the Scratch interface, and there are three different attachments for fixing it to real-world things. One has a belt clip, another has a suction cup, and the third has holes for tying ScratchGo to objects. The device charges over USB and runs for two days of usage, holding its charge for six months when unused. The Scratch team filled the table with random stuff from a pound shop and invited us to see what we could do in pairs. My partner and I rigged up an inflatable guitar with the ScratchGo, and made it so you could press the centre button to start a guitar sample playing, and then move the guitar up or down to change the pitch. The ScratchGo was a lot of fun to use, and much easier to get started with than other sensor-based devices, such as the Microbit. The device we saw is probably what the final product will look like, but its name and colours might change. As for a release date? Some time in 2020, hopefully early 2020, we were told. The price wasn't disclosed, but we were told they won't be able to achieve the price of the Microbit (under £15). 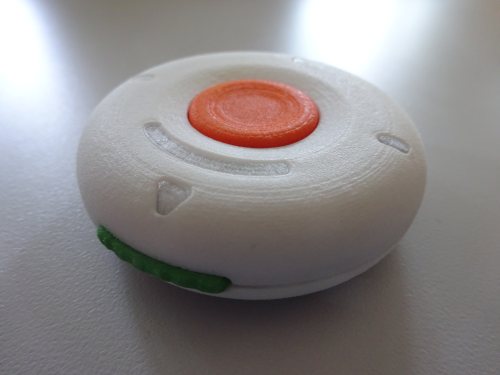 The prototype of the ScratchGo device, the first official hardware for Scratch 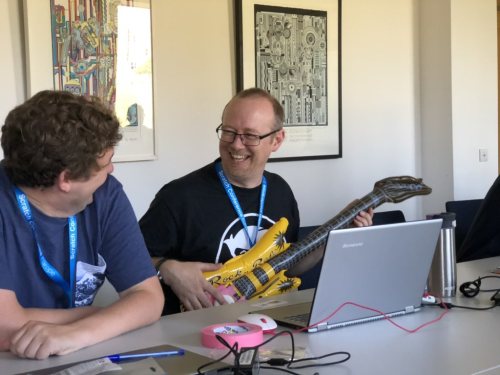 Rock out! Yeah! With thanks to Matt for the photo

Benedikt Hochwartner led a session on creating art using the Scratch paint editor. We started off with pixel art, where the most important guideline was to keep it symmetrical at first, and add your own x and y axis lines to guide you as you create your image. We then created some vector art, where we morphed a circle into a fish and a whale. Vector art is the new default in Scratch 3 and it is great for creating editable and scalable costumes. I think it's harder to make the mental leap from drawing a fish outline with a brush, to tweaking a shape like a circle to create one, though. I'll be spending some more time with the vector art editor now it's the default to see if I can improve my skills. 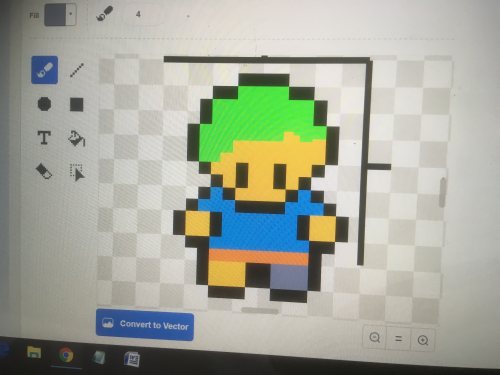 It's a mini me! I coloured one leg grey for my walking boot

There were many more highlights in the conference. There were lots of impromptu demos and discussions, and other scheduled talks that I don't have time to cover here. The closing shows were great, and both incorporated Scratch creatively. It was lovely to chat to people I knew mainly from Twitter, and to meet others who share my enthusiasm for Scratch.

I'd like to thank the Raspberry Pi Foundation for hosting a fantastic conference, the Scratch team for supporting it, the team at Churchill College in Cambridge who hosted us, the sponsors (Google, Epam, and Amazon) who helped to keep the ticket prices low, and everyone who attended and delivered sessions. I'd also like to extend my thanks to everyone who helped me over the weekend, both attendees and college staff: I am still using crutches, after breaking my ankle in July, so it made a huge difference to me that everyone was so generous with their help. Thank you.

You can find my new Scratch resources site here. Find out more about my Scratch books here.