Scratch Lab has been launched, a new site that gives you a preview of some of the ideas that might end up in the Scratch programming language. When Scratch 3 was launched, it introduced the concept of extensions. These make it possible for the Scratch Team to add new features to the language without breaking the core features, and without overwhelming users with features they might not need. Now, you can preview two new extensions that are in development, and that might, or might not, end up in Scratch.

The first of these addresses one of the most requested features in Scratch: the ability to display text, outside of speech bubbles. I imagined this feature might have been implemented by using the pen to write on the Stage, but the team has taken a different approach. The Animated Text blocks seem to have the same effect as changing your sprite's costume to your desired text, except that you don't see a change in the Costumes Area. You can change the text's size and position using the normal Motion and Looks blocks, and use graphic effects on it. The Animated Text blocks include rainbow, typewriter, and zoom effects (where the text flies towards you). There is a block to change the text colour, change the width of the text area, change the text's alignment, and change the font. There's also a block that shows the sprite's real costume again.

I can see a lot of potential with this. The flexible animation options are great (and would be hard to do with an implementation closer to the Pen blocks). It gets around some common problems when creating interactive stories or games, but still leaves lots of room for creative coding. The only thing that might be confusing is the idea that the sprite turns into your text. It's consistent with Scratch generally (everything that moves, appears, or disappears is a sprite) but the transition between the sprite and the text is new and might take some getting used to.

Here's a simple program I wrote to bounce some text around the screen. This only works in the Animated Text version of Scratch at the Scratch Lab. I put some spacing in the middle of my text to force the line break in the right place. The image in the top right shows you what it looks like. 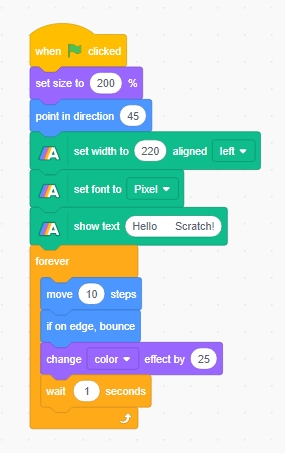 The other new extension available to preview is face sensing. This is fun! There are blocks to move a sprite to a particular facial feature ("go to nose"), point in direction of face tilt, and detect the degree of face tilt. There are hat blocks to trigger scripts when the face tilts left or right, and to start a script when a sprite touches a particular part of the face. There's also a block to start a script when a face is detected. I wrote a simple game where you try to head the ball that's bouncing around. As the video below shows, it's fun, but the head detection isn't perfect. It seems to be detecting the forehead, and possibly by reference to other facial features, so making sure they are all on screen and clearly visible might help improve detection rates.

Here's the simple code to build that game. It uses just one of the experimental new blocks, to turn the ball around when it hits my head. To use this code, visit the Scratch Lab Face Recognition test here. I expect publishing code in Scratch Lab gives the Scratch Team a chance to see how people use the new features and how popular they are before considering whether they should be built into the main language. I'd love to see both of these included. The Face Recognition feature adds a degree of AI to the video sensing feature that will make engaging new projects possible. The Animated Text extension adds a much requested capability, and does it in a way that feels native to Scratch. I look forward to seeing more new features in the Scratch Lab in the future!

While you're here, why not download a free sampler from the fully updated 2nd Edition of Scratch Programming in Easy Steps, get a free project from Cool Scratch Projects in Easy Steps, or visit my Scratch programming tutorials for more tips and tricks in Scratch!