In January I contributed a monologue to a play that was staged at my local theatre. A number of local authors contributed pieces, which were then edited to form a stage play, with horse racing sequences between the monologues.

The play was called 'A Night at the Races', and writers were invited to create monologues for characters who might attend a race course. My character, Ray, is a self-deluding gambler, who believes he has a scientific system for picking winners, and who has some interesting views on the banking crisis.

The actor who played him, Nick Hayles, has worked with film-maker Mark Hindle to create this brilliant short video of the monologue. Hope you enjoy it. Feel free to leave a comment below, and if you want to contact either Nick or Mark, contact me and I can put you in touch.

Photos from the iPad 2 launch today

As you've probably read, today was the launch of Apple's iPad 2. I went along to a PC World shop in a sleepy town near me to check it out and was surprised to see a queue of 30 or 40 people there. I can't imagine how long the queues must have been at Apple's own stores, especially in central London. The shop sold out of about 30-40 units fairly quickly, which was surprising for a run-of-the-mill PC store. Don't forget that represents at least £16,000 worth of sales in half an hour. I expect that scene has been repeated across the country, too. Here are some pictures I took... 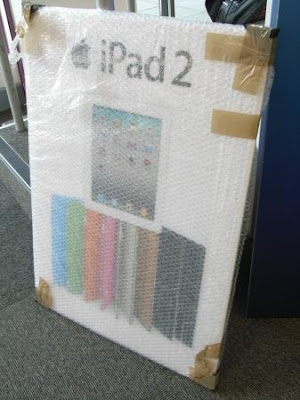 The marketing materials, waiting to be unveiled 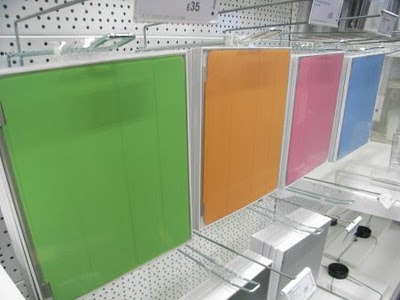 You can look, but don't touch. The shiny new cases were defended by shop staff until 5pm, and then only available to those who bought the iPad. 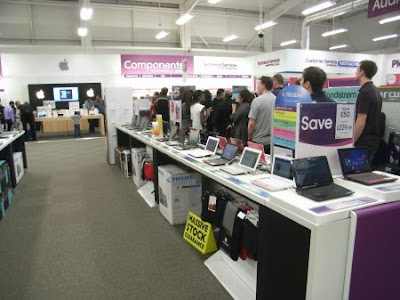 The queue. I got there at about 4.30, which is half an hour before the official on-sale time, and they had nearly allocated all the units they had. Congratulations to the idiot near the front who changed his mind when it came time to buy later, and so messed up the allocations for those behind him in the queue. When they say 'think different', they don't mean that. 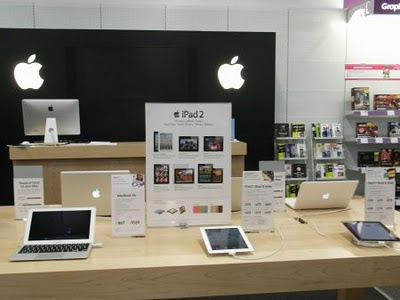 And there it is, on display at last. Those who were buying one couldn't leave the queue to try it out first, which was sort-of funny. Everyone was relieved when they were finally put on display and plugged in, if only because it stopped the table's security alarm whining. 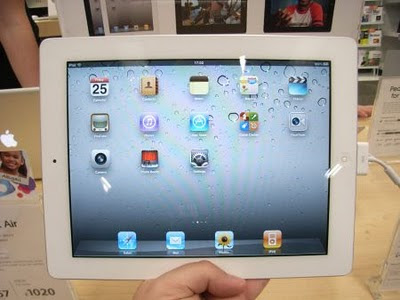 And here it is! Ta-da! I didn't think the physical dimensions would make much difference, but it felt quite a bit lighter than my 3G iPad 1, although that might be partly because I was holding a Wi-Fi demo unit. I don't think the unit's noticeably heavier than my SLR camera, so it might be okay for shooting HD video, although it's still a bit clumsy to point. Still waiting for that tripod! 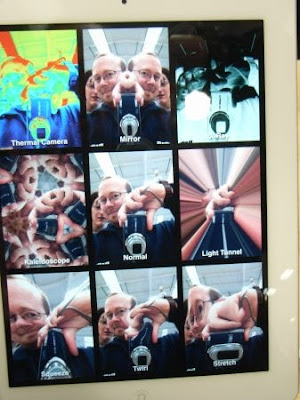 Here's the Photo Booth software, which enables you to shoot photos with weird effects applied. It's interesting, but feels more like something for a Nintendo handheld than the iPad. I expect we'll tire of seeing photos featuring that Dr Who title sequence tunnel effect, but it's a nice way to have a bit of fun with the camera, even in a PC shop, which isn't the most photogenic place to shoot.

I'm looking forward to getting my hands on the iPad 2 for a proper play with it. The main difference is the camera and video conferencing app FaceTime, plus a couple of minor things in the apps.

By the way, I passed the half-way point in writing the first draft of my book iPad for the Older and Wiser today. Cheers!

Some thoughts on Apple's iPad 2

So what's new with the iPad 2? Firstly, there are two cameras. One is on the same side as the screen, so it can film you while you're using the iPad. This is useful for video calling, something for which the iPad is a natural fit. The other camera faces away from the device, so that you can take pictures using it, and see what you're photographing on the iPad's screen. That will be a helpful addition, although probably not as useful as it is on the iPhone because the iPad is a bit big to hold up in the air as you try to frame the perfect picture. Perhaps we'll see specialist iPad tripods emerge though, which will make it easier to use this camera, especially for shooting HD video.

Apple's proud that the new iPad is thinner. While it is remarkable how much computing power they've squeezed into a device that thin, I don't think this really matters to most people. The original iPad was remarkably thin, and there comes a point at which it doesn't really matter how much thinner it gets. We probably don't want the iPad to get too thin, anyway, otherwise it'll start to feel insubstantial and fragile.

The new iPad can also process faster than what we will now start calling iPad 1. It has a multicore chip, which means its processor can do two things at once. That doesn't necessarily mean it will do, though. Depending on the apps you use, they might need to be rewritten (by their creators) to take advantage of the extra processing capability. Combined with the reported improvement in graphics speed on iPad 2, we might start to see richer and more immersive games as a result of this. We should also expect to see operations like search, bulk calculations (if you use it for work) and PDF processing speed up over time as the apps we use catch up with the technology.

Although Apple has often had a gap of several months between a press announcement and its product release, the iPad 2 will be in the shops in the US next week and is scheduled to follow in the UK shortly afterwards. The iPad 1 will continue to be sold, and its price has been reduced. This seems like a smart move: the iPad 1 remains a great device, and will satisfy many people who don't want to pay the extra for the video cameras.

The iPad 2, though, opens up a whole new realm of possibilities. The video filming could work well, if a tripod becomes available, and the video conferencing will, I'm sure be a hit. The Nintendo DSi never really made the most of its built-in cameras, but with Apple's open ecosystem of thousands of developers, I'm sure we'll see some innovative and fun apps taking full advantage of them before too long.

What do you think about the iPad and iPad 2? Feel free to leave a comment below.