Tim Berners-Lee, inventor of the world wide web, delivered the closing keynote at RSA Conference last week, outlining some of his ideas for a more secure web.

For the future of the web, it’s critical for applications to be able to access information from other applications, he said. He gave the example of those web-based event planning apps where each person in a group of friends enters the time and date they could meet up, and the app finds a consensus. The computer already has each person’s calendar, though, so it’s got a good hunch about when people are doing important things already. You end up with people typing in information that the software already has.
Berners-Lee spoke about software having what I would describe as “a conflict of interest”, for example an auction application which might represent his bids but also has access to everyone else’s and could easily cheat. The issue of trust is key, and Berners-Lee suggested we might use different parts of the screen or different colours to help identify the different sources of data and how trustworthy we should consider them to be. He also gave the example of software he uses to manage his tax return, and said he was “shocked and disturbed” when the software asked if it could sell him insurance. If he pays for software, he says, he wants to know it’s working on his behalf, and he was so annoyed by this that he gave up using the application and wrote his own instead. This is a problem that’s less of an issue with a website like a travel agent’s site, because Berners-Lee assumes the application is working on the travel agent’s behalf there, he said. As we move to the cloud, it strikes me that new types of advertising become technically possible but Berners-Lee insisted the cloud needs to be under the user’s control, with no backdoor for serving ads based on the data stored in it.
The key is that there needs to be a way for the user to control the resources every application gets, Berners-Lee said, including CPU, memory (local and in the cloud) and the disk and camera. He said he wants to be able to give particular apps, people and groups access to different pieces of data on all his devices, without any defaults that might result in data leaking and without having to set it up from scratch for each new app. And there needs to be a clear, colour-coded user interface, that makes it easy to see at a glance who has access to different types of data (such as family, work colleagues, everyone, and the user only). For example, he might use an exercise app which tells everyone he did 40 minutes of exercise, show friends and family the GPS trail of the path he took, and reserve details of his weight for his eyes only.
If it’s possible for apps and people to share data in a secure way, under the user’s control, there will be an explosion in apps that can talk to each other, which could lead to all kinds of new ways to share and process our data.
What do you think the future of web-based apps looks like? 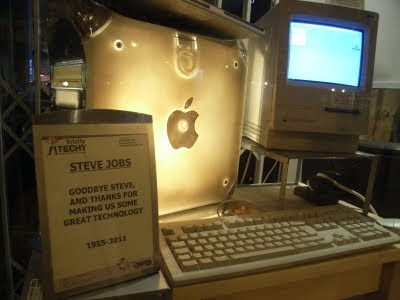 I spotted the shop display above while out and about yesterday. I was saddened to hear of Steve Jobs dying earlier this week, but I don't think I have anything to add to my blog post about his achievements written when he stepped down as CEO.

Save 90% on the best of Black (Colin Vearncombe)

As my friends know, I’m a huge fan of Colin Vearncombe (also known as Black), who is best known for the hit ‘Wonderful Life’, but who has been writing and recording continuously since that broke through into the mainstream in 1987. He’s now issued a best-of album, after putting the tracklisting to a fan vote. It includes re-recordings of Wonderful Life, an atmospheric Sweetest Smile, a new live version of Water on Snow (one of his finest songs), and tracks drawn from across his albums since he became an independent artist.

The 16-track album usually costs £7.50, but for a limited period you can get it for 75p by using the code smg4song. Buy the album here and enter the code to claim your discount. It’s available in a range of digital music formats, including MP3 and FLAC. If you don’t know which format to pick, choose MP3, which plays on most devices, including the iPad. (Leave a comment if you’re struggling to add MP3s to an iPad, and I’ll talk you through the process).

Independent musicians could pick up a nice idea here: to incentive sites to promote Black’s work, he’s giving a prize each month to the website that refers the most visitors using a unique discount code. To be honest, I don’t think I’m in the running for the prize, having seen a code on a much more popular website than this, but I’m pleased to be able to share Black’s music. It’s meant a lot to me over the years, and I hope you’ll give it a whirl and see whether it’s your thing.

You can read my interview with Colin from 2000 here and my interview from 1993 in Hamburg here. Colin was kind enough to review my novel about the music industry University of Death, and you can read his comment on it here. But before you read anything, I’d start downloading that album if I were you…