Apple has unveiled the iPad 3, and perhaps the most surprising thing is that there were few surprises. There had been so much speculation before its release, some of it informed by leaked photos of parts and some of it possibly planted, that there was already some consensus on what would be introduced in the iPad 3. 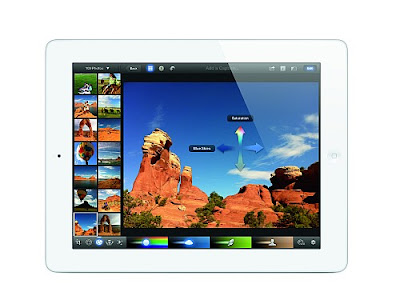 There were a few predictions that didn’t come true, including a fascinating story in The Guardian about a haptic technology that makes the flat screen feel like it has texture, so you can feel the edges of keys, for example. There were rumours the Home button would be removed so that all the controls are gesture-based, although this seemed unlikely, both for usability and branding reasons.

We now know that there are two main changes: the first is that the camera quality has been improved. It still lags behind the iPhone’s camera quality or a dedicated digital camera, but it’s significantly better than the iPad 2. Until I get my hands on one, I won’t be sure what kind of shots it will be good for, but the previous camera was only really suitable for video calling or for quick grab shots. It couldn’t be used as a real camera, to make photos you’ll want to keep forever. Hopefully, the iPad’s new camera will be much closer to what we would expect from a camera phone.

The other main change is that the screen resolution has doubled, so text and images will look sharper. The device will be able to play back HD video at its full resolution, which led to some speculation that the device would be called the iPad HD, although there’s no indication of that on Apple’s website. Apple just calls the device a third-generation iPad. Apple says the higher resolution has no significant impact on battery life, which is good news.

There are a few other changes that will be less obvious. The iPad now supports 4G mobile communications, but since there isn’t much coverage for these in the UK, that’s unlikely to make much difference here. You can use your iPad’s mobile connection to create a wi-fi hotspot for other devices, although this is probably of most use if you’re getting superfast 4G speeds in your mobile connection.

The new iPad also has a new processor, called the A5X, which has double the graphics processing capability of the previous processor, so it can manage the enhanced screen effectively.

The release of the iPad 3 also came with some software enhancements. The camera app has been redesigned, most notably so that the button to take a photo is somewhere you can actually reach it without having to juggle the iPad with one hand. It’s now possible to delete photos from the Photo Stream folder on the iPad, although that delete instruction doesn’t seem to synchronise with other devices, so you’ll need to delete the photo on your other devices too. The camera is also said to have face detection built-in, so that it can optimally balance the exposure across all the faces in your photo. Apple says it’s also improved the sound quality on the iPad so that films and TV shows sound better. All these features, plus some bug fixes, are available to owners of older iPads who upgrade their iPad software to version iOS 5.1 (obviously, you still need an iPad 2 with a built-in camera to use the Camera app). If you’re not yet running iOS 5.0, see my guide to upgrading to iOS5. If you have upgraded to iOS 5.0, you can upgrade again to this latest version iOS 5.1 by going into your Settings app, tapping General, then Software Update.

There’s also a new software feature which Apple hasn’t rolled out to older iPads, which is a new dictation button on the keyboard which enables you to dictate text to the screen. At first I thought this was a simple software feature that could easily have been given to those with older iPads, but on reflection, voice recognition is quite processor-intensive, so it might need the new A5X chip to work.

Apple has also released iPhoto for the iPad (pictured, above). When Apple announces a new application like this, I feel a little conflicted. On the one hand, it’s great that they’ve invested in creating new software. On the other hand, given the device costs about £500, it wouldn’t hurt them to give away the software, rather than charging £3 for it, which almost seems petty. When you buy a new Mac, you get iPhoto, iMovie and Garageband for free, and these are all sold separately for the iPad. Apple did introduce basic photo editing capabilities in the iOS5 software upgrade for the iPad, so perhaps I shouldn’t grumble about them making enhanced features available to those who are prepared to pay a bit for them, given they have to invest resources in creating the software.

The iPad 3 will be released on Friday 16th March and Apple is taking pre-orders now if you’re interested. Amazon doesn’t have a proper listing for the iPad 3 yet, but I expect other retailers will be advertising it for sale and pre-orders over the next few days.

(Corrected, with thanks to Michael Hülskötter, to clarify that the quad-core is for graphics only).