Download free Back to the Future game for your iPad

For a limited period, you can download episode one of the Back to the Future iPad game for free. The game is a lovingly crafted tribute to the 1985 movie and its sequels, developed with the help of many of the team from the original movie, including co-writer and producer Bob Gale, and Christopher Lloyd, who played Doc Brown. 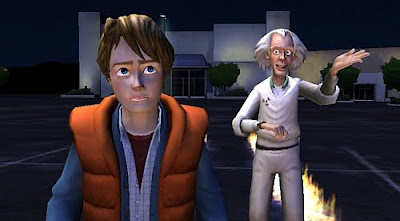 The game itself is like an interactive film. You control Marty, who can wander around the rooms and streets you travel through. You can talk to characters by tapping them and selecting one of the predetermined phrases, and you can examine objects by tapping them in the background. This interface can be a little frustrating at times. There was one puzzle where I knew what I had to do, but couldn't work out why it wasn't working and that was because I wasn't quite tapping the right place, but there is a good hints system that gives you graded hints until it reveals the answer, so you can push the story along. The graphics and characterisation are great, and the music from the original films helps to build atmosphere.
I experienced a couple of bugs playing the game, the most significant of which is that a couple of lines of Marty's dialogue were inaudible. The save game feature would benefit from being more finely grained: you can't control when the game saves, and the chapter chunks are quite large, so the game doesn't suit the kind of dip-in-drop-out play that I usually associate with iPad games. There's enough richness in the story and its presentation, though, that I was happy to be sucked in for longer periods of time.
I'm a huge fan of the Back to the Future films, so I loved being able to wander around Hill Valley myself, and appreciated the details they've added which non-fans might not notice. So far, it feels like an extension of the original films, taking the much-loved characters in new directions, while respecting their personalities and shared histories.
There are five episodes in total. For now, episode 1 is free and the others are reduced in price. For tips on downloading apps to your iPad, see my book iPad for the Older and Wiser.
(With thanks to Mark for telling me about this. We saw the original film together in the cinema 27 years ago. Great Scott!)

The BBC has announced that it is running a new talent search to discover comedy writing talent (link now offline). If you have an idea for a comedy that 'reflects modern Britain', and that will have a studio audience roaring with laughter, then you have until 21st March 2012 to submit your entry. You need to put together a 30 minute script (roughly 30 pages), together with an outline of how you see the series developing. Since it's recorded in front of a studio audience and there's talk of catchphrases, I expect they're looking for something fairly mainstream.
The competition will be judged by Dawn French among others, and the prize is a week-long intensive course polishing your script with BBC producers, and the opportunity to have your sitcom staged at the Edinburgh Fringe Festival and in the BBC's new home of Salford.
Last year, I attended the Comedy Writers' Festival in London, and shared some of the key things I learned about how to write comedy.

Speed up your PC and shrink your slideshows

I've written two short tutorials for Microsoft Office, picking up on a couple of specific problems that I've come across recently.
One of them is about how to make PowerPoint files smaller, so they can be emailed. A colleague asked me about this recently, so (after helping her!) I thought I'd write an article outlining how to use the Compress Pictures feature in PowerPoint, and why it's different to just zipping up the final presentation (which often doesn't have much effect). I wrote this piece before Christmas but I haven't mentioned it on the blog before, so I thought I'd give it a plug here.
I've also just published a piece about Windows ReadyBoost. This is a fantastic feature that enables you to use a USB key as extra memory on your computer. It's greatly speeded up Word and Excel for me, and it's made Windows much quicker too, especially at rendering thumbnails of photos in a folder. Given how cheaply you can get a USB key for now (16GB for about a tenner) this is a really cost-effective way to speed up a computer that's become sluggish. Find out how to speed up Microsoft Office and Windows using ReadyBoost.